A few years ago I headed to the Kensington Dollshouse Festival with my Mum, a fellow miniature fan, and an exceptionally patient husband!

Whilst there I fell hopelessly in love with some hand built 1/24th scale Tudor houses by Triggerpond and have coveted them ever since. They had to be custom built to order and the price, whilst fair, was way out of reach. I’ve been constantly on the look out for one which was more suited to my budget ever since but never seen anything that came close to these.

My reason for going down in scale from my usual 1/12th was purely a matter of space. We don’t have a huge house and whilst she’s a wee little thing, it’s amazing how much space Munch takes up! I’d seen quite a few 12th scale tudor houses which met my criteria but I just couldn’t see how we’d fit them in.

Fast forward to Christmas 2015. My husband starts to look worried and drops the odd comment expressing his concern about a gift he’s purchased. “I think you’ll love it” he says “but I think your first reaction will be to flip out in a panic about space”.

Here is the gift he was worrying about. A beautiful Tudor house which he found on the website of a little antique shop in Lincoln. I’m told it was quite an epic task to get it couriered to the Isle of Wight!

He was assured it was one of a kind, hand built and a replica of the Lincoln Tea Rooms. I’ve not been able to find reference to the building as yet. He was also however, assured it was 1/24th scale but when the courier delivered it, he started to realise that perhaps there had been some mix up! It is indeed 1/12th scale but I’m not going to quibble. It’s really quite beautiful.

It has 3 removable sections revealing a large open plan downstairs and a cute little room upstairs. It’s pre-lit and pretty much good to go, ready to fill with furniture. My plan is to make it the home of a Tudor merchant, or at least a middle class Tudor family. I’m undecided about thatching. My initial thoughts (based on minimal research) are that most houses in towns were tiled to protect from fire so I think I may leave it as is. 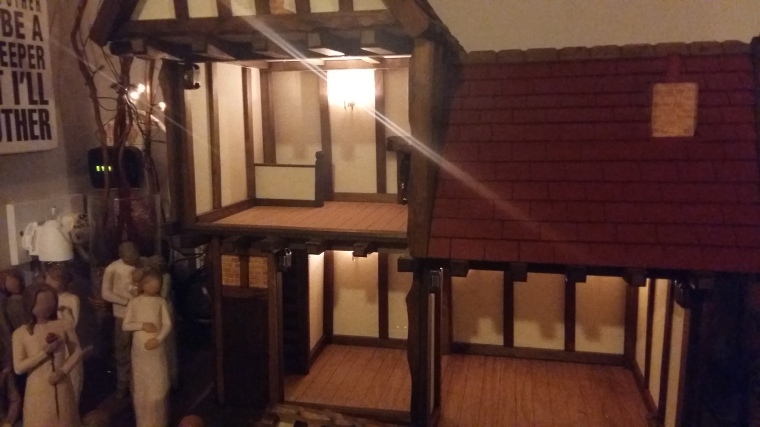 It looks great when it’s lit but the light fittings are a bit on the modern side. There was also a fire in the bedroom which was a little too 1980s for my liking. I’ve replaced this with an adorable little log and peat fire from Romney Miniatures (links below) which cost me all of about a fiver! I already had the bulb to insert from the other fire but you can buy the bulbs on the same site, either separately or along with their fireplaces, for a reasonable price too. 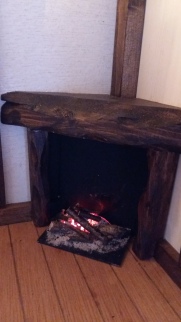 Fire in place in “bedroom”

Also from Romney Miniatures are my replacement light fittings, again around a fiver each. They have a great range of Tudor light fixtures and for pretty much the best price I’ve seen online thus far. I’m yet to tackle fitting them because the bulbs are unbelievably small but will let you know how this goes when I get brave enough to do it! As an important aside, the guys at Romney Miniatures are also super efficient and delivery was swift!

Whilst we’re on fires, I’ve ordered a whole tudor fireplace complete with bread oven from FirecraftMiniatures on Etsy for the kitchen area. They’re made to order so take a little while to arrive but I have an inkling it will be worth the wait. I had a despatch email yesterday so watch this space for a review!

You can find the log and peat fires, fittings and lighting at: